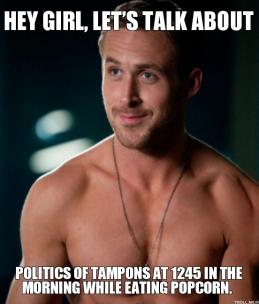 Right now, there are movements worldwide to remove tax on hygiene products. So called the “tampon tax”.

In Australia, feminine hygiene products are taxed at 10%. This tax contributed to the equivalent of $19 million USD to their government. However, we are talking about a country that does not tax “essential health items”. These items include condoms, lubricants, nicotine patches, and sunscreen. I don’t get how feminine hygiene products are not included as an essential health item.

Canada’s bill to tax-exempt feminine hygiene passed and will begin on July 1st. This will include tampons, pads, and menstrual cups. I’m not sure of the nuances of this law. Like, if I paid $40 for a menstrual cup last year that will last me the next 10 years; I don’t get a tax credit on that, do I? I’m sure the law just applies to new purchases moving forward.

Now, I’m not saying that we need to remove this tax in the US. I get the US does things differently, and by state. Some states don’t tax food at fast food restaurants when you get it ‘to go’; they only charge the tax if you are using their facility to eat. Some states don’t charge tax on clothes, because they say that clothes are essential.

However, I got to thinking about this, and thought – we could use some tax credit just for being female. You feel me? First of all, it’s well-known (& accepted) fact that women make less money than men. How about a tax credit to off-set that? Also, women just have to deal with more *ish than men. Just ask any woman what she goes through in a normal day, and ask a man. It’s dramatically different.

Now I’m not belittling what Bruce Jenner went through. I get that he lived his whole life with an inner conflict that weighed on him everyday. I don’t mean to diminish that in any way. I’m just saying, to be a woman in this country, world actually, is not easy.