There is a new slew of comic book superheros that are women, and of course you know that I love that! One such (newish) superhero is a Muslim teen, born in Jersey City. She is Kamala Khan by day, and morphs into Ms. Marvel when the going gets tough!

Well, in San Francisco, a hate group has bought advertising on public transportation. Anti-Islamic advertising, that likens Islam to the Nazis. I don’t want to show their ads, but I think I must to truly show how despicable they are. But FIRST, let me show you what someone has plastered OVER their ads. Which I THINK ARE AWESOME. 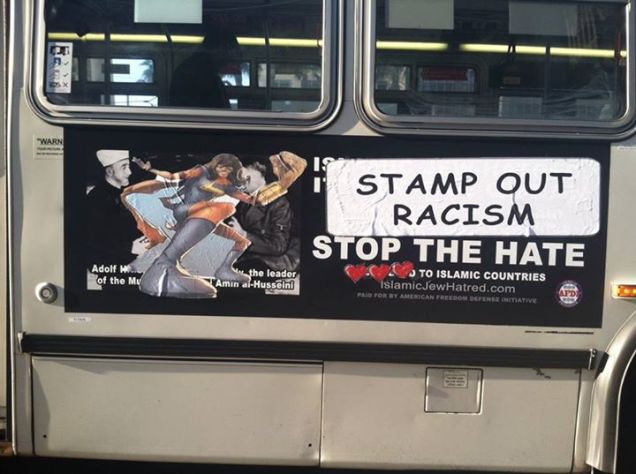 Now, here’s the thing. Someone at the city of San Francisco (or in the company of the transportation system, I don’t know if it’s a private company or city-owned), sold the advertising space to a known hate group. The Freedom Defense Initiative is considered a hate group, same as the KKK.

I get that the First Amendment is a BFD here in the US. But I never quite got how it supersedes hate groups. Hate groups are ok here in the US; their rights are protected. The Westboro Baptist Church is protected to the extent of the hate they spew at funerals (even of veterans that died so they could have that freedom).

Remember John Galliano? The famous designer? He got in trouble for hate speech in France. Other countries take Hate Speech more seriously. But only certain targets of hate there (from what I can see). I say that because Charlie Hebdo can publish all sorts of filth about religions, and it’s free speech. But France arrested 54 people for expressing their freedom of speech. I guess hate speech is not tolerated in their country, but it depends on what type of hate speech you have, and who it is you’re hating on.

I really don’t want to promote the ad, but I do want you to see how outrageous it is. It’s ridiculous, stupid, outrageous. Comparing to the Nazis? Really? Anyway, since I don’t necessarily want to promote it on my front page, I’m putting it after the jump. The only thing after this is the unadulterated ad.

Oh, go read my post on galliano. For real.