President Barack Obama has been called the “deporter in chief”; since he has deported more illegal immigrants than any other president. When he ran for President, his platform agenda included immigration reform.

The Republicans realized that election (2008) that America wanted more tolerance and less racism, which they didn’t know before. They started looking into being “more inclusive” of other races. They took the ball and worked out an immigration reform bill.

Then they sat on it.

It is now 2014. So the President has finally said, “Hey. We need to do something about this promise I made 2 elections ago.” Not in those words, obviously.

And everyone’s getting worked up? Did you not realize this was coming… um…. SIX YEARS AGO? When he PROMISED it would happen?

And these are people who ALREADY live and work here. You don’t want their tax money? Because they do want to pay taxes. And there’s stipulations. It’s not a free for all. It’s rhyme and reason. In fact, it’s the same rhyme & reason that all the other presidents (including your idol Ronald Reagan supported).

I hear people saying things like “it’s the law”. Yes, and that’s why Obama has deported so many undocumented immigrants. However, what about that pesky Slavery law? That got changed, right? And that law that women can’t vote? That was changed. Laws are not written in stone. They evolve, like we do.

Yes, you read that right. They pay taxes. Not just taxes on the goods they buy (sales tax and property tax), but also income tax. Yes, they are undocumented immigrants. To work in this country, they may have used a fake social security number. That means, they paid income taxes using that SSN. They paid money into a social security system that they will never get any benefit from. They just donated to your & my social security fund. Well, maybe not mine; it may run dry before I get there. Oh, I’d be remiss if I didn’t at least mention the other way that they can (& do) pay taxes – an Individual Tax ID Number (ITIN). I barely know how to do my own taxes, so I can’t really explain how all that works. If you’re really interested, though, you’ll find a way to research it!

There are 11 million undocumented people living here in these United States. This action would apply to about 4.4 million of them. There’s no way to actually find and deport the 11 million. Do you have any idea how much that would cost?!

Related Article (pic links to article), explains how prior to the 1920s, there was no real process to enter the US. So, all those that came over here were essentially the same as these undocumented immigrants. 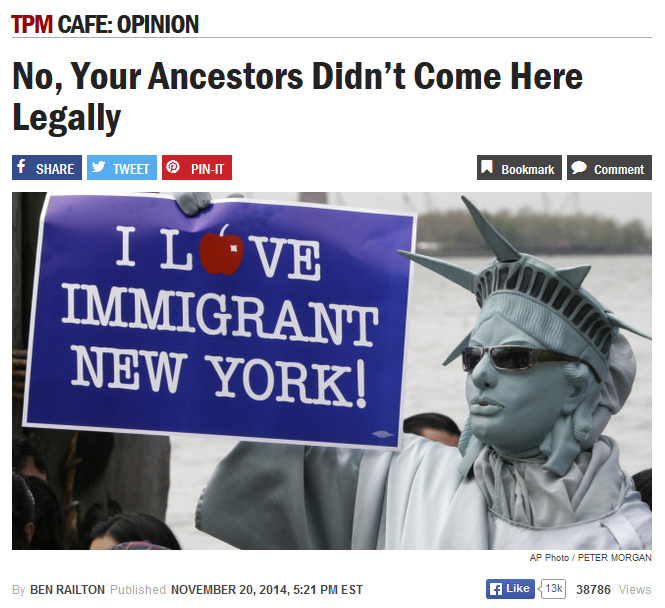