I’ve been compiling reasons why I’m voting for Obama, & thought I’d put them up in a public space so they can be viewed by anyone. So, this is a randomness.

The repeal of DADT.

‎”Obama is the first President in a generation to make a car go further on a gallon of gas.” –Adam Werbach

“… he supports the idea that corporations should be held accountable for their actions through regulation, and should contribute to bringing down the national debt through fair taxation of their proﬁts.” –Nate Mendel

EVOLUTION.
I need a Pres. that can evolve with the world. This is not flip-flopping. This is accessing the environment & your constituents, & making a decision that best suits the ppl of your nation at the time. B/c our world changes. We must adjust ourselves to it. Or we kill the world. Then what?”

THE ARTS.
The Detroit Symphony Orch had a CRIPPLING strike that lasted for MONTHS. It seemed like forever. Now, the Atlanta Symphony is in jeopardy. To the point where even administration there is at odds with board members. Maybe I’m more concerned about it b/c I do know dozens of musicians in these places. But I also know that Romney plans to ELIMINATE all (what he calls excess) funding for the arts.”

NATIONAL SECURITY. We need a leader that understands the importance of finding those responsible for atrocities against our country. And has a plan, not just going into a mission, but also an exit strategy so that our sons & daughters can be husbands & wives.

– Ended the ban on travel for those w/ HIV

“President Obama had everything to lose & nothing to gain by not publishing the photos of a dead body. It simply shows that while he has a priority to protect the nation, he carries it out w/ integrity.” – Etgar Keret

– Medical care was redic/nonexistent prior; he created the Joint
Virtual Lifetime Electronic Record program to fix/organize that.

– Put an end to Bush-era Stop-Loss policy (extension of duty once tour is done, often arbitrarily sent soldiers back just as they returned home).

– Expanded VA budget to pay for more mental health professionals ($4.6B – not sure if you’ve seen Vet suicide rates, but they’re staggering!)

– Reauthorized (& funded) families of fallen soldiers to be able to visit when the body arrives at Dover AFB. (& ended media blackout on coverage of fallen soldiers – they deserve recognition for making ultimate sacrifice for our freedoms & beliefs)

– Repealed DADT (I mentioned that 1 on a diff day already – worth
repeating).

Since President Obama took office, oil imports have dropped by an average of 1.1 million barrels per day.
– In 2010 domestic crude oil production reached its highest level since 2003.
– In 2010 natural gas production reached its highest level in more than 30 years.
– The U.S. has become a net exporter of fuels for the first time since 1949.
– The Obama administration has proposed a five-year offshore leasing plan that makes more than 75 percent of undiscovered oil and gas resources off our shores available for development, while putting in place common-sense safety requirements to prevent a disaster like the oil spill in the Gulf of Mexico from happening again.”

Pres. Obama more than tripled the govt’s investment in clean energy sectors such as the smart power grid, energy efficiency, electric cars, and renewable power. These investments are responsible for saving or creating 224,500 jobs as of the end of 2010.

– The Obama administration issued a conditional loan guarantee for the construction of the first nuclear power plant to be built in the United States in decades. Once constructed, it will provide enough clean energy for 1.4 million people.

– The administration funded the weatherization of more than 600,000 homes, saving low-income families an average of $400 in heating and cooling costs in the first year alone.

And randomness about Mitt Romney:

“Mitt Romney plans to remove regulations on air and water quality and cut off funding for the National Labor Relations Board.” –Marilynne Robinson

There’s 1 part of the Romney “47% video” that no one’s talking about. This part: “… use Ann sparingly. So ppl don’t get tired of her.” Really? I know you have no respect for women, but YOUR OWN WIFE?! Your partner, to be by your side, through “better or worse”. Like, when I hear Pres. Obama talk about his wife, mother, grandmother; you always hear respect. Maybe that’s why his policies on women is to not regulate them.

Mitt Romney is disdainful of “government assistance,” because he’s never known anyone who needed it.

“Mitt Romney is disdainful of “government assistance,” because he’s never known anyone who needed it.” – Moby
I’m a little surprised that this group didn’t correct Moby. Mitt does know someone who needed Government assistance – his parents. They did not make it on their own, they did not “built that”. They got help. Mitt doesn’t seem to remember, & I think that makes others think it didn’t happen.

The lying of the Romney-Ryan campaign. I can’t have a president that lies to me. Says one thing in the debate, but his website (in writing) says the complete opposite. 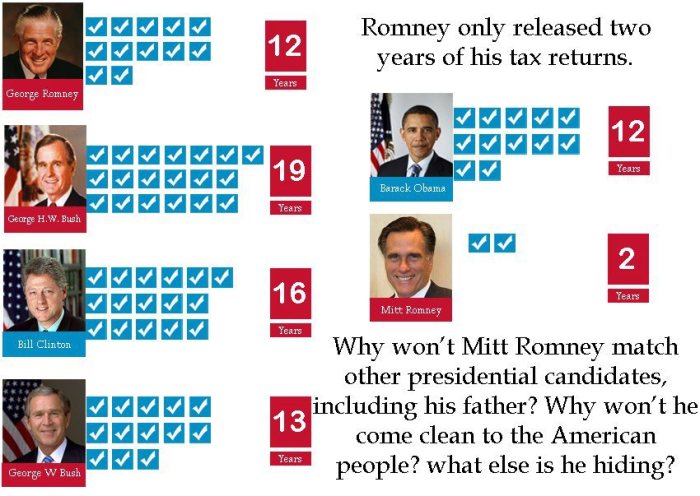 Romney wants to dismantle FEMA & privatize disaster relief. He says it would be “immoral” to count on the govt to fund disaster relief efforts for its own country 😦

Mitt Romney says he’s not going to raise taxes. But by “not raise taxes”, he means he’s going to increases taxes & fees. He don’t speak American. And I need a President that speaks American.

– economists say that his tax plan (to balance budget in TEN YRS) is mathematically IMPOSSIBLE.

– he says he has no tax cuts for billionaires (ie corps lining his pocket), but his website indicates otherwise, IN WRITING.

– for those of you college students, or w/ kids about to go into college, he’s getting rid of Pell Grants, and the Clinton tax credit for college.

– his advisors (same as Bush) are planning on having us go to war w/ Iran, which will def plunge us into a real recession!

– The GO(T?)P believes a baby should be borne of rape, but that in-vitro fertilization should be illegal? I’ve held/snuggled/kissed so many babies born via IVF, & the were miracles that the family longed for.

One thought on “What has Obama done?”

There was an error retrieving images from Instagram. An attempt will be remade in a few minutes.