Today, I got an email today from my President. I thought I’d share it here, b/c it made me feel like I may not be living in time-space continuum anymore.

Yllw* —
Today, I was asked a direct question and gave a direct answer:

I believe that same-sex couples should be allowed to marry.

I hope you’ll take a moment to watch the conversation, consider it, and weigh in yourself on behalf of marriage equality:
http://my.barackobama.com/Marriage

I’ve always believed that gay and lesbian Americans should be treated fairly and equally. I was reluctant to use the term marriage because of the very powerful traditions it evokes. And I thought civil union laws that conferred legal rights upon gay and lesbian couples were a solution.

But over the course of several years I’ve talked to friends and family about this. I’ve thought about members of my staff in long-term, committed, same-sex relationships who are raising kids together. Through our efforts to end the “Don’t Ask, Don’t Tell” policy, I’ve gotten to know some of the gay and lesbian troops who are serving our country with honor and distinction.

What I’ve come to realize is that for loving, same-sex couples, the denial of marriage equality means that, in their eyes and the eyes of their children, they are still considered less than full citizens.

Even at my own dinner table, when I look at Sasha and Malia, who have friends whose parents are same-sex couples, I know it wouldn’t dawn on them that their friends’ parents should be treated differently.

So I decided it was time to affirm my personal belief that same-sex couples should be allowed to marry.

I respect the beliefs of others, and the right of religious institutions to act in accordance with their own doctrines. But I believe that in the eyes of the law, all Americans should be treated equally. And where states enact same-sex marriage, no federal act should invalidate them.

If you agree, you can stand up with me here.

Here’s my old post from November 2008 (seriously? I’ve been complaining about this that long?!): I didn’t realize it was still 1960

Gallup poll on acceptance of marriage (sigh… same-sex marriage, since I think we’re still calling it that for now). 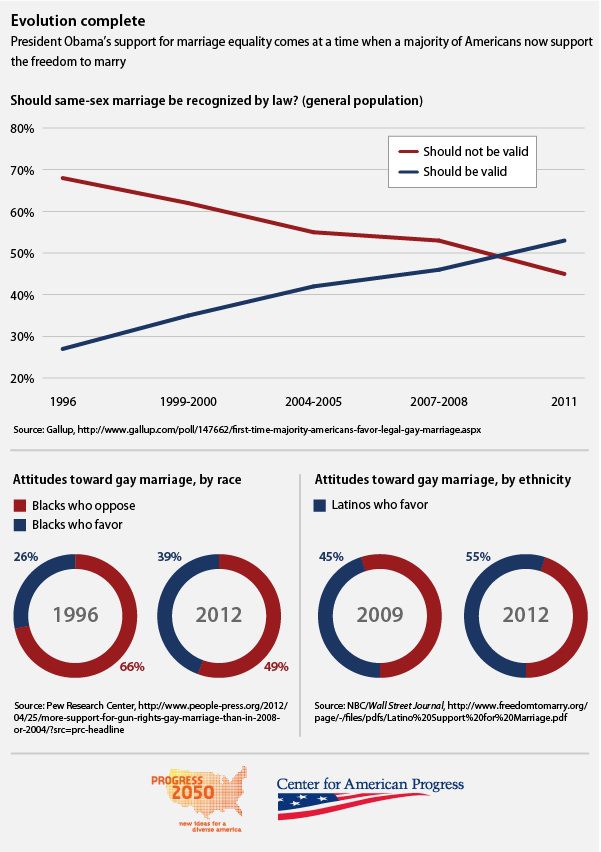 *name has been changed to protect my own self 😉

2 thoughts on “Obama on same-sex marriage”