My childhood was pure childhood.  I knew nothing of what went on outside my lil area.  I read my books, did my lessons (education was/is very imp in my fam), & played.  We didn’t really watch any tv.  Maybe on Saturdays.  Cartoons in the morning; & I remember there was a Disney movie every Sat evening.  Sometimes after school cartoons, but not when we were really young.

The books I read as a child were Indian stories; my grandfather would always ship or bring back books (written in English) of Indian tales.  We even had a subscription to Chandamama, an Indian magazine for kids.  It’s all hip now & online as an interactive website. It was similar to Highlights magazine; even had a good boy/bad boy page, Vikram & Vetal like Goofus & Gallant. It had some religious stories, & a serial fiction story that was to be continued every month. I looked forward to each magazine!

Then, I think around the time I turned 10, we started watching the news as a family. The local news & national. It was the Evening News w/ Dan Rather at first, then switched to World News Tonight w/ Peter Jennings in the early 90s.

I’ve told y’all before that I was naturalized as a US citizen when I turned 18 so that I could vote.

But the whole point of this is that I was looking at pictures from a recent Indian election, & it made me proud of where I come from. India has the largest democracy in the world. The largest. & they take their responsibilities seriously.

Ppl make such a big deal of this last election here; w/ the highest voter turn-out. & that’s great. But it’s only great if the voter turn-out continues to increase election after election. I’m interested to see what this country does in Nov. 2010, & Nov. 2012.

Check out these pictures from the recent Indian election. Truly amazing. In #5, you’ve got an older woman who walked 68 miles to vote. And I know everyone’s aware of Hindu-Muslim tensions all over the world, but #25 & #35 say it all. We’re talking about tensions that go back thousands of years, yo!

You have to check out the pictures. They are amazing. Ppl hanging out on rooftops to attend an election rally. Ppl taking cable cars across valleys/rivers to get to the election site.

I really can’t imagine ever living in a non-democratic nation. 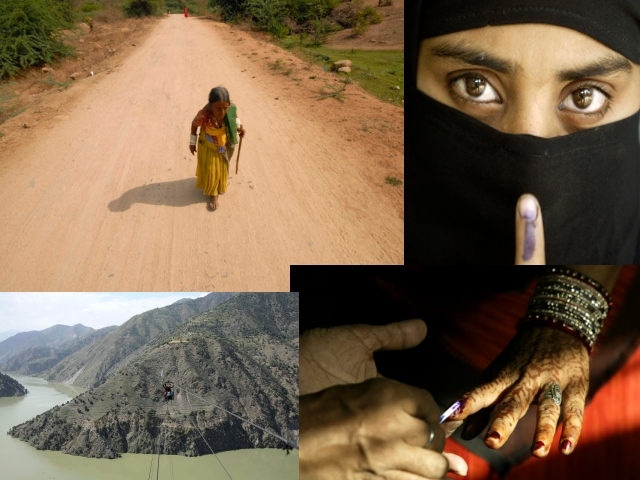